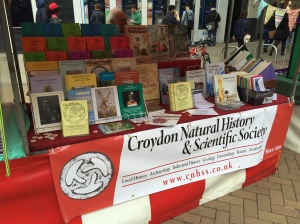 The annual Croydon Heritage Festival is upon us. Along with many other Croydon organisations, CNHSS has a great programme of events lined up.

Following the Heritage Day on North End on Saturday, 18 June, the CNHSS events programme kicks off on Sunday, 19 June with a walk around Croham Hurst. Meet at 2pm at the Bankside entrance to Croham Hurst.

On Thursday, 23 June we have two events running. At 3pm, at the Fairfield Halls, Celia Bailey gives a talk on ‘the Housing Question in Croydon’. This is followed at 7:30pm by a further talk by Carole Roberts and John Hickman on the fabulous John Gent collection of postcards with many old views of Croydon. These have been very popular talks in the past, so this one is sure to be well-attended again.

John Hickman returns on Friday, 24 June, once again at the Fairfield Halls. This time the theme is old films featuring Croydon during the Twentieth Century. With piano accompaniment by Martha Littehales of Riddlesdown Collegiate.

And finally, this exciting week of events closes with our annual open day at the Croydon Natural History & Scientific Society Museum. Artefacts on display from our significant collection are from prehistoric, Roman, medieval and post-medieval periods. There will be short talks, plus tea and cake available. A great way to round off your Croydon Heritage Festival experience!